The nearly two-hour video appears to show drone footage of an extravagant mansion, two helipads, a guest house, and multiple other structures across a sprawling coastal property. It was uploaded by Alexei Navalny, the Russian politician and Putin critic who was nearly killed by a nerve agent attack in Germany last year.

Navalny, who’s currently being held in a Moscow jail, alleges that Putin secretly had the Black Sea residence built using illicit funds from his billionaire friends.

“[They] built a palace for their boss with this money,” Navalny says in the video.

The palace sits on roughly 170 acres and is worth an estimated $1.4 billion, according to Navalny. He also alleges that a much larger piece of adjacent land belongs to Russia’s Federal Security Service.

Putin’s office did not immediately respond to Insider’s request for comment, but the Kremlin has denied that Putin has any connection to the property.

“This is not true. There is no palace, he is not an owner of any palace,” Putin’s spokesperson Dmitry Peskov told CNN earlier this week. “Those are all rumors, and there were some disputes between the owners of those premises, but they really have no connection with President Putin.”

Insider was not able to independently verify Navalny’s claims.

An 11-bedroom mansion, 2 helipads, and an underground hockey rink

Putin’s alleged secret residence sits near the coastal town of Gelendzhik on the Black Sea in southern Russia, underneath a no-fly zone, according to the video.

“This is like a state within a state where one irremovable czar rules,” Navalny says in the video. “It is built in a way that no one can reach it by land, sea or air, thousands of people working there are banned from bringing even a simple cell phone with a camera… but we will take a look inside.” 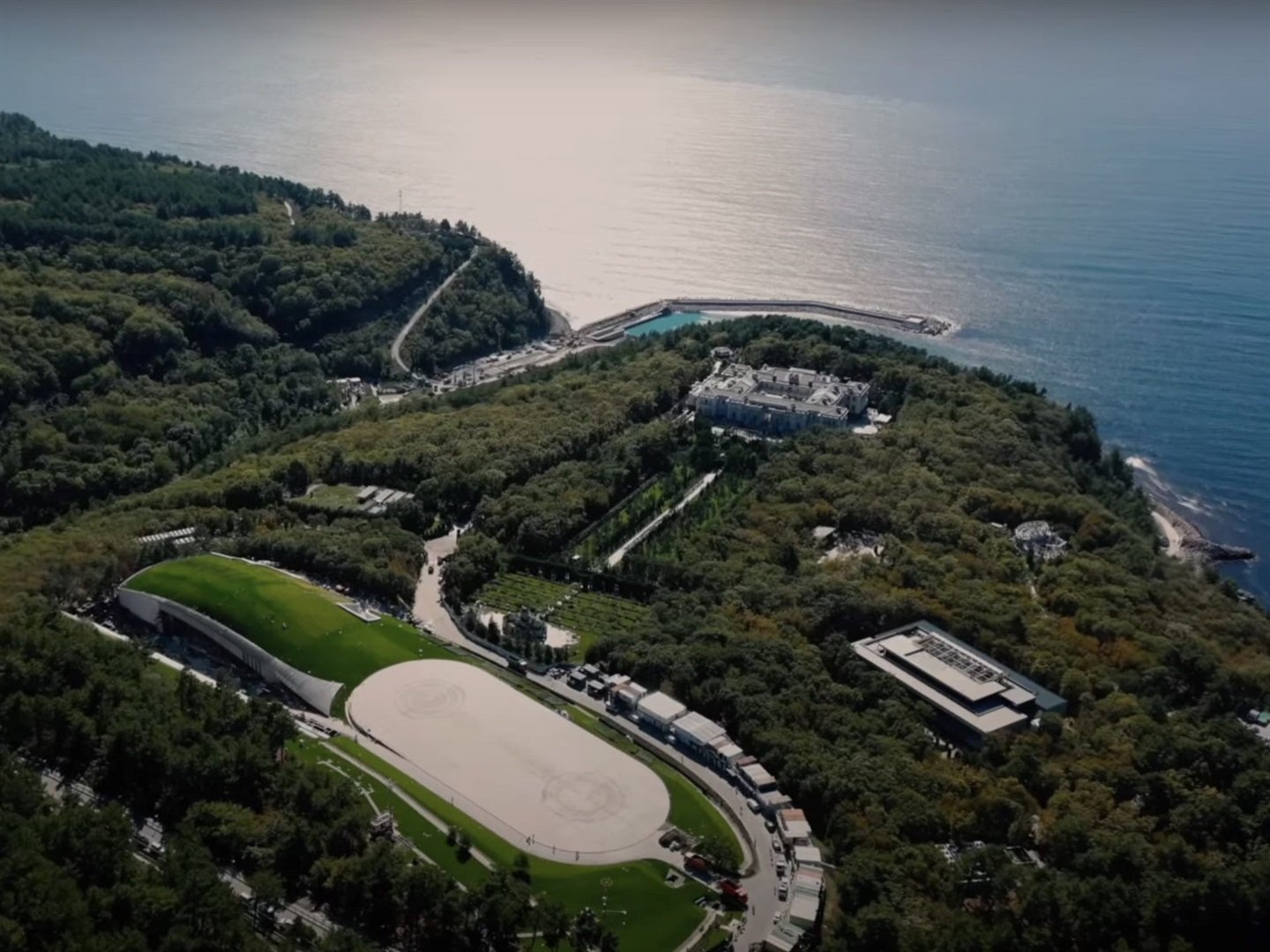 The video was produced by Navalny’s nonprofit organization, the Anti-Corruption Foundation (FBK). According to FBK, a subcontractor involved in the construction of the residence gave the organization detailed building plans.

The plans show that the mansion is the largest private residential building in Russia, with almost 18,000 square metres of living space, according to FBK. An underground hockey complex is situated under a grassy dome next to the helipads, per the video.
Alexei Navalny/YouTube

To get the footage, FBK employees took a boat into the Black Sea and sent a drone flying over the property. The footage, narrated by Navalny, shows not only a lavish mansion, but expansive grounds with two helipads, an underground hockey rink, a church, a sculpture garden, an incomplete amphitheater, an arboretum and greenhouse, and a bridge that leads to a guest house.

The main residence has 11 bedrooms, multiple living and dining areas, a private theater, a Las Vegas-style casino, a swimming pool, saunas and a hammam, a cocktail lounge, a gym, and staff quarters, according to Navalny. An underground tasting room was even built into the side of the cliff overlooking the sea, he says. 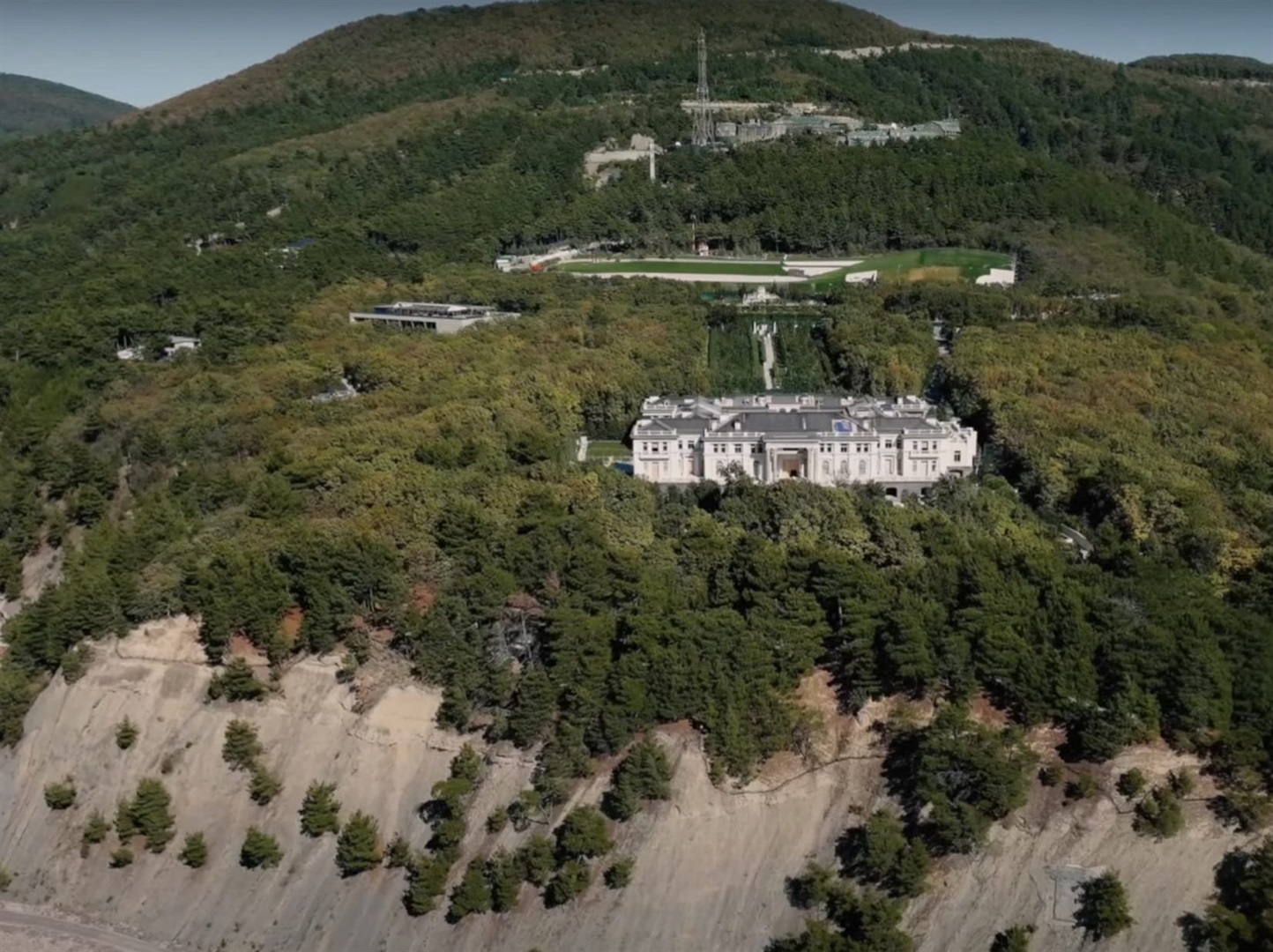 A 2014 Reuters investigation found that two wealthy associates of Putin had illegally funneled money to a company that helped build the Black Sea palace.
Alexei Navalny/YouTube

Putin’s alleged secret palace has been a subject of intrigue for years. In 2010, Russian businessman Sergei Kolesnikov wrote a letter to then-president Dmitry Medvedev claiming an opulent estate was being built for Putin on the Black Sea by one of Putin’s longtime friends.

A 2014 Reuters investigation found that two wealthy associates of Putin had illegally funneled money to a company that helped build the Black Sea palace that allegedly belongs to Putin.

Putin’s official office is the Kremlin, a fortified complex in Moscow’s center that’s made up of more than 15 buildings, 20 towers, and more than 2.4km of walls that are up to 6m thick.

But unlike in the US, where the president lives and works out of the White House, the president of Russia doesn’t actually live at the Kremlin. Instead, Putin’s Moscow home is the Novo-Ogoryevo residence, which is tucked away behind high walls patrolled by guards in Rublyovka, a ritzy suburb west of the city. The FBK’s video notes that even the most luxurious homes in Rublyovka are several times smaller than the Black Sea palace.

The extent of Putin’s wealth remains a mystery. The Russian president is conspicuously absent from Bloomberg’s and Forbes’ rankings of the world’s billionaires. At a 2017 Senate Judiciary Hearing, outspoken Putin critic and financier Bill Browder estimated the president “has accumulated $200 billion of ill-gotten gains” and described him as “one of the richest men in the world.”

‘Have they lost their minds?’- Carl Niehaus slams Zondo for recommending jail time for Zuma

Australian Open: Heather Watson among 47 players to quarantine in Melbourne after Covid cases...

Black Zine - January 17, 2021
0
Heather Watson is among 47 players to be confined to their hotel rooms after positive coronavirus cases on their flights to the Australian Open. The...

Black Zine - January 14, 2021
0
The EFF has called for the local government elections and the reopening of schools to be postponed due to the rising number of Covid-19...

‘I have broken no rules’: Mantashe wedding interrupted by adjusted Covid...

Fikile Mbalula: ‘Zuma will lose nothing by going to the state...