Elgin Baylor, the Lakers’ 11-time NBA All-Star who soared through the 1960s with a high-scoring style of basketball that became the model for the modern player, died Monday. He was 86.

The Lakers announced that Baylor died of natural causes in Los Angeles with his wife, Elaine, and daughter Krystal by his side.

“Elgin was the love of my life and my best friend,” Elaine Baylor said in a statement released by the Lakers. “And like everyone else, I was in awe of his immense courage, dignity and the time he gave to all fans. At this time we ask that I and our family be allowed to mourn his passing in privacy.”

With a silky-smooth jumper and fluid athleticism, Baylor played a major role in revolutionizing basketball from a ground-bound sport into an aerial show. He spent parts of 14 seasons with the Lakers in Minneapolis and Los Angeles during his Hall of Fame career, teaming with Jerry West throughout the ’60s in one of the most potent tandems in basketball history.

Baylor had an uncanny ability to hang in mid-air indefinitely, inventing shots along the way with his head bobbing. Years before Julius Erving and Michael Jordan became international superstars with their similarly acrobatic games, Baylor created the blueprint for the modern superstar.

“Elgin Baylor set the course for the modern NBA as one of the league’s first superstar players,” NBA commissioner Adam Silver said in a statement. ” An 11-time All-Star during his Hall of Fame career with the Lakers, Elgin produced remarkable results with his athleticism and groundbreaking style of play, including setting an NBA Finals record with 61 points in Game 5 of the 1962 championship series – a performance made all the more extraordinary by the fact that he had spent part of that season away from his team while on active duty in the Army.

“In addition to his legendary playing career, Elgin was a man of principle. He was a leading activist during the height of the civil rights movement in the 1950s and 1960s and an influential voice among his fellow players.  After his retirement, Elgin remained a part of the NBA family as both a coach and an executive, imparting his wisdom to generations of NBA talent.  Elgin will be deeply missed, and we send our thoughts and prayers to his wife, Elaine, his family and friends.”

Born on Sept. 16, 1934, in Washington, D.C., Baylor played one season at the College of Idaho before transferring to Seattle University, where he led the team to their first NCAA championship game before being drafted first overall by the Minneapolis Lakers in 1958.

Baylor averaged 24.9 points, 15.0 rebounds and 4.1 assists as a rookie en route to Rookie of the Year honors. Baylor would go on to play 14 seasons for the Minneapolis and Los Angeles Lakers, earning NBA All-Star honors 11 times with 10 First Team All-NBA appearances. After retiring from basketball in 1971, Baylor went on to serve as a coach for the New Orleans Jazz and Vice President of Basketball Operations for the LA Clippers.

The 6-foot-5 Baylor played in an era before significant television coverage of basketball, and little of his play was ever captured on film. His spectacular style is best remembered by those who saw it in person — including West, who once called him “one of the most spectacular shooters the world has ever seen.”

At one time Baylor owned records for most points in a game, in a playoff game, and in one half of a playoff game. In 1962-63, he became the first NBA player to finish in the top five in four different statistical categories — scoring, rebounding, assists, and free-throw percentage.

Because his career paralleled the succession of juggernaut Boston Celtics teams in the 1950s and 1960s, Baylor never played on a club that won an NBA Championship. His best years as a scorer coincided with Wilt Chamberlain’s peak years, and Baylor never captured a scoring title.

“Elgin was THE superstar of his era – his many accolades speak to that,” said Lakers Governor Jeanie Buss said in a statement released by the Lakers. “He was one of the few Lakers players whose career spanned from Minneapolis to Los Angeles. But more importantly he was a man of great integrity, even serving his country as a U.S. Army reservist, often playing for the Lakers only during his weekend pass.

“He is one of the all-time Lakers greats with his No. 22 jersey retired in the rafters and his statue standing guard in front of STAPLES Center. He will always be part of the Lakers legacy. On behalf of the entire Lakers family, I’d like to send my thoughts, prayers and condolences to Elaine and the Baylor family.”

Elgin Baylor became the 10th person honored with a statue outside of Staples Center in a ceremony in 2018.

In 1961-62, Baylor hit his stride along with West, the Lakers’ hotshot second-year guard. Unfortunately, Baylor was playing at a time when eligible males were required to perform military service, and his season was curtailed. He spent half of the year stationed at Fort Lewis, Washington, playing only when he could obtain a weekend pass. He appeared in 48 games that season.

Still, with Baylor (38.3 ppg) and West (30.8 ppg) combining for almost 70 points per game, the Lakers won the Western Division by 11 games and advanced to the NBA Finals. In what would become a familiar matchup, the Lakers played the Celtics for the championship — and lost. Boston won Game 7 in overtime, 110-107, to claim a fourth consecutive title. Baylor was phenomenal in the playoffs. He scored 61 points in Game 5 of the title series, setting a single-game playoff record that would stand for 24 years until Jordan with the Chicago Bulls scored 63 against the Celtics in a first-round contest in 1986.

Knee troubles began plaguing Baylor during the 1963-64 season, and many said he was never quite the same player afterward. Although he would never again average more than 30 points after 1962-63, he had five more All-Star seasons ahead and was a major scoring force for six of the next seven years, averaging at least 24 points in every season except 1965-66, when his output fell to 16.6 points per contest.

The Lakers remained a winning team throughout those years, although they were constantly overshadowed by the Celtics, who won 11 championships in 13 seasons from 1956-57 through 1968-69.

In 1965-66 Baylor’s knee problems limited him to 65 games and a 16.6 scoring average. But West (31.3 ppg), Rudy LaRusso (15.4), and Walt Hazzard (13.7) picked up the slack as the Lakers won the Western Division and advanced to the NBA Finals for the third time in four seasons. Once again they ran into the Celtics who were poised for a rout after taking a 3-1series lead. In Game 5, Baylor ripped the net for 41 points and led the Lakers to a 121-117 win in Boston. After taking Game 6, the Lakers ran out of steam as the Celtics escaped with a 95-93 Game 7 win and another title.

Two games into the 1970-71 season Baylor went down with a knee injury that all but ended his career. He missed the rest of the campaign and then returned for only nine games in 1971-72 before retiring at age 37. Ironically, later that season the Lakers won their first championship since moving to Los Angeles. Baylor had ended an illustrious 14-year career without a championship ring.

Shortly after his playing career came to a close, Baylor tried his hand at coaching. He was hired by the expansion New Orleans Jazz as an assistant coach for the team’s inaugural 1974-75 season. He served two full years in that capacity before replacing Butch van Breda Kolff as head coach early in the 1976-77 campaign. Baylor guided the young Jazz for the rest of that season and for the next two seasons, compiling an 86-135 record. His teams failed to reach the playoffs and finished no better than fifth in the Central Division. Baylor stepped down after the 1978-79 season.

Baylor won named NBA Executive of the Year in 2006, when the Clippers would win their first playoff series since 1976.

He resigned from his post in L.A. in October of 2008 and filed a wrongful termination lawsuit against the team in February 2009, claiming he was “discriminated against and unceremoniously released from his position with the team on account of his age and his race.” 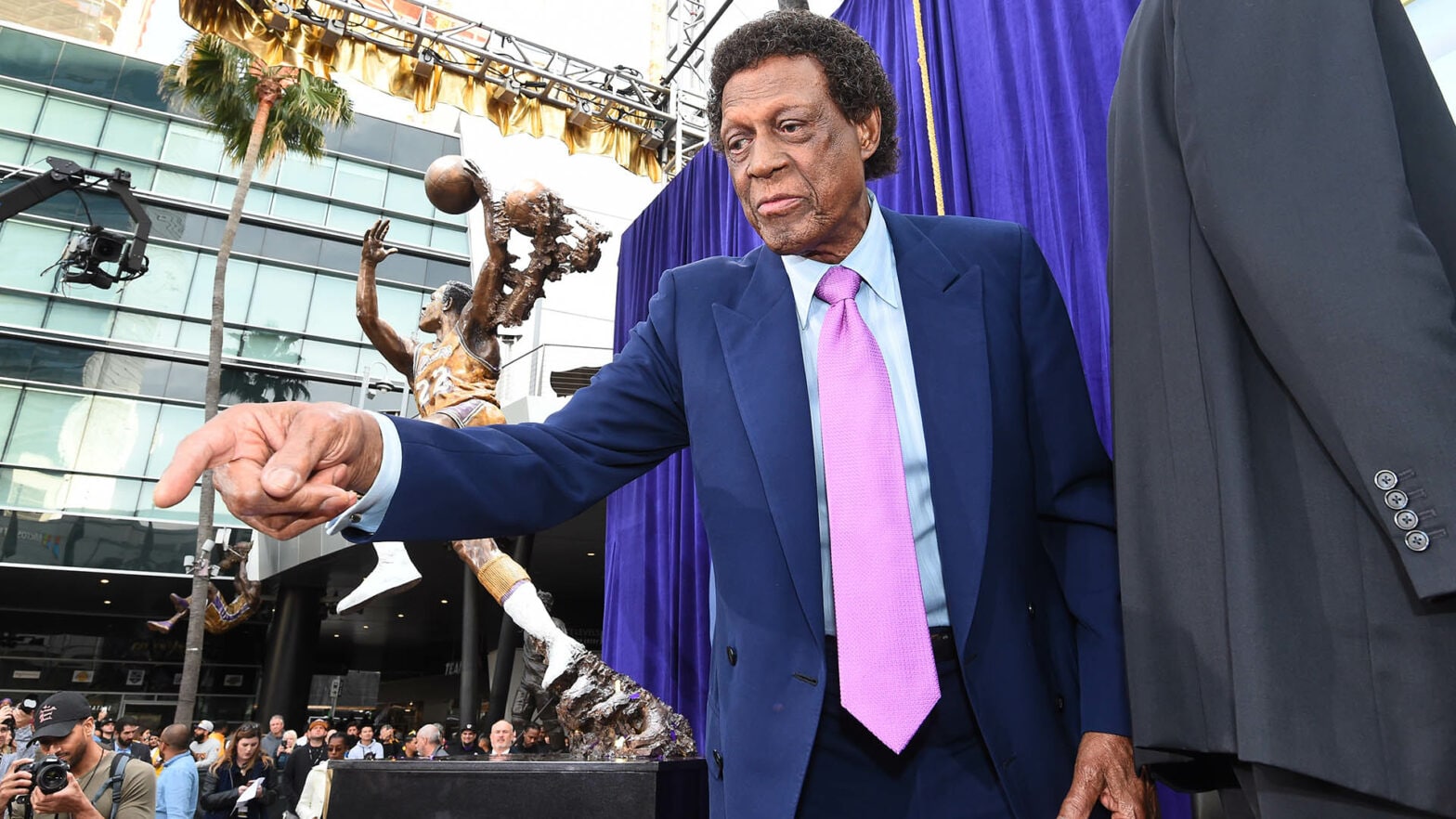 Elgin Baylor looks on as his statue is unveiled at Staples Center in 2017.

In 2011, a jury rejected his claim of age discrimination and harassment and declined to award him any damages. The racism allegations and all allegations against the league were dropped by his attorneys before that trial. Baylor was made a permanent fixture outside the Staples Center in Los Angeles in April of 2018 when the Lakers unveiled a statue of him outside the arena.

Baylor’s statue was, at the time, the sixth that decorates the front of Staples Center, joining West, Shaquille O’Neal, Kareem Abdul-Jabbar, Magic Johnson and Chick Hearn.

ANC to smash myths about 5G and other Covid-19 conspiracies

Black Zine - January 5, 2021
0
The ANC will abandon its dismissive approach to conspiracies about Covid-19 and plans to create platforms to educate its members about the coronavirus. This comes...

Black Zine - February 2, 2021
0
Elon Musk became the richest man in the world thanks to enthusiasm for Tesla Inc.’s sleek electric cars — and the company’s stratospheric stock...

Government can watch you online – But now it has to tell you when...

CJ McCollum out at least 4 weeks with fractured left foot